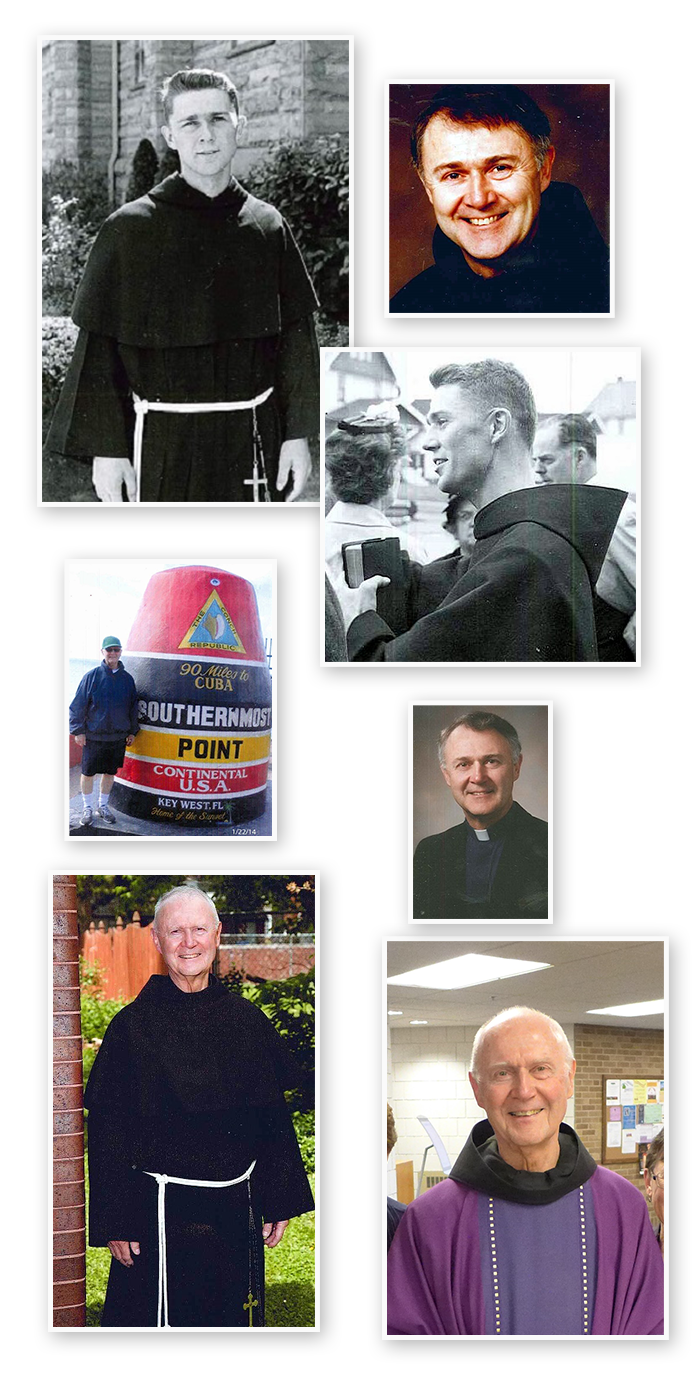 Friar Edmund Goldbach OFM Conv. lived with a quiet, peaceful certainty that God would guide him to where he was needed, where God wanted him to be. A profound prayer life reinforced his faith and trust that God would always provide.

Friar Edmund passed away on March 14, 2021, in Edina, Minnesota. He was born Clarence George Goldbach, Jr. to Clarence and Mary Regina (Clinton) Goldbach in Cleveland, Ohio, on August 29, 1938. He was predeceased by his parents and his brother Dennis, and is survived by his sisters Nancy Jean Engle (+Don) and Barbara Ann Lesniak (+Don), 10 nieces and nephews, and nearly 40 great-nieces and -nephews.

After graduating from the minor seminary at Mount St. Francis in 1956, he entered the Conventual Franciscan Novitiate in Angola, Indiana, and professed Simple Vows on July 21, 1957. He received his undergraduate education at Our Lady of Carey Seminary in Carey, Ohio, where he professed Solemn Vows on July 23, 1960. He then attended Assumption Seminary in Chaska, Minnesota, and was ordained to the priesthood on March 13, 1965, in St. Paul, Minnesota.

A gifted pastor, Fr. Edmund served in parish ministry in Kentucky, Wisconsin, Minnesota, Iowa, Michigan, Ohio, and Indiana. He served within the Province of Our Lady of Consolation in leadership roles and in the formation of new Friars.

“You could tell that he was faithful to his prayer life and acted out of his relationship with God,” said a Friar who served with Friar Edmund. “He would often say that something was Providential, that it was meant to be. He went where he was asked to go.

“He was thoughtful and wanted to be of service. Ed loved the people, being with them and serving them. Even after a long day, he would make time to attend a parish event because that’s where the people were. But he was also thoughtful in deliberations – he was able to consider every side of an issue. At times you had to wait for his input, but it was worth it.”

“There aren’t too many brothers like him,” she said. “He was always checking in on us, always very supportive. But also he had friends all over the country. We always said he could travel from coast to coast and have a place to stay. He treated everybody the same, whether it was the president or a pauper.”

Friar Edmund’s pastoral nature was nurtured by his life as a Franciscan.

Memorial gifts may be made to the Province of Our Lady of Consolation, 103 St. Francis Boulevard, Mount St. Francis, Indiana, 47146, or use the form on this page.