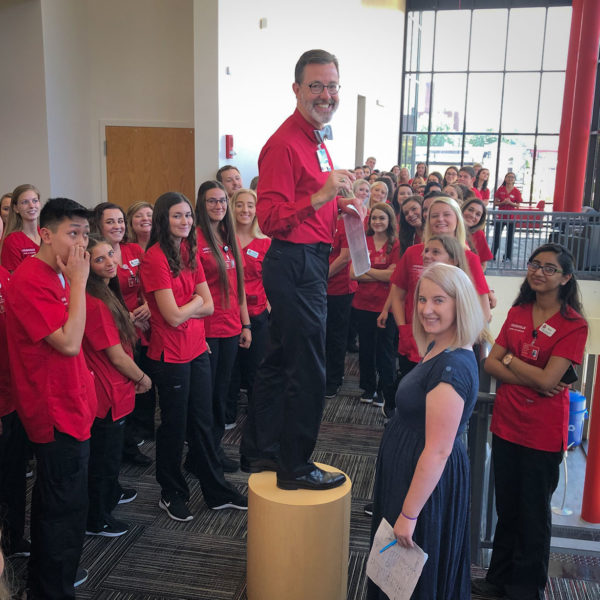 Born and raised in Louisville KY, friar Paul Clark pursued a dream to work in healthcare, and attended St. Louis University (SLU), in St. Louis, MO.  While at SLU, he met Fr. Mario Ross OFM Conv., a Franciscan friar and SLU campus minister who invited Paul to live with the friars of St. Bonaventure friary over the Summer break.  A year after graduating from SLU, he joined the friars formerly in 1990 as a postulant.  He would eventually attend the Washington Theological Union, in Washington, DC, earning an MA in Theology in 1997, returning to SLU to earn a BS in Nursing in 1999.  Paul relocated to San Damiano friary in San Antonio, TX in 2000, where he was part of the friar community while he worked in the emergency department as a registered nurse (RN) at Methodist Hospital. In 2006 he completed an MS in nursing, and a PhD in nursing in 2010 at UT Health, San Antonio School of Nursing.  He relocated shortly after graduation to Mt. St. Francis friary in Southern Indiana where he currently resides.  He joined the faculty of the University of Louisville in the School of Nursing where he works as an Assistant Professor, teaching undergraduate nursing students, and researching how to help build resilience and workplace engagement in nurses.  In 2018 he was awarded the Novice Faculty Excellence in Clinical Teaching Award by the American Association of Colleges of Nurses, in 2020 was inducted as a Fellow in the Academy of Emergency Nursing, and is the author/co-author of over 20 publications that can be viewed at  https://orcid.org/0000-0003-4990-875X