The Ysleta Mission, located in El Paso, TX, is recognized as the oldest continuously operated parish in the State of Texas.

La Misión de San Antonio de Ysleta del Sur, established in 1680, owes its heritage to Pueblo traditions, Franciscan Missionaries and Spanish Colonial life in Northern New Mexico. This and the other three missions established here after the Pueblo Revolt of 1680 are children of the pain of intolerance between cultures and forced emigration. Though in the present State of Texas, this mission’s life and identity is knitted integrally to the Missions of the Kingdom of St. Francis – present day New Mexico.

Ysleta Mission, along with the others, was established by Antonio de Otermín and Fray Francisco de Ayeta in 1680. Spaniards and Native Americans arrived here, then south of the Rio Bravo, in October 1680. They had fled or were forced to accompany the refugees of the Pueblo Revolt in Northern New Mexico. 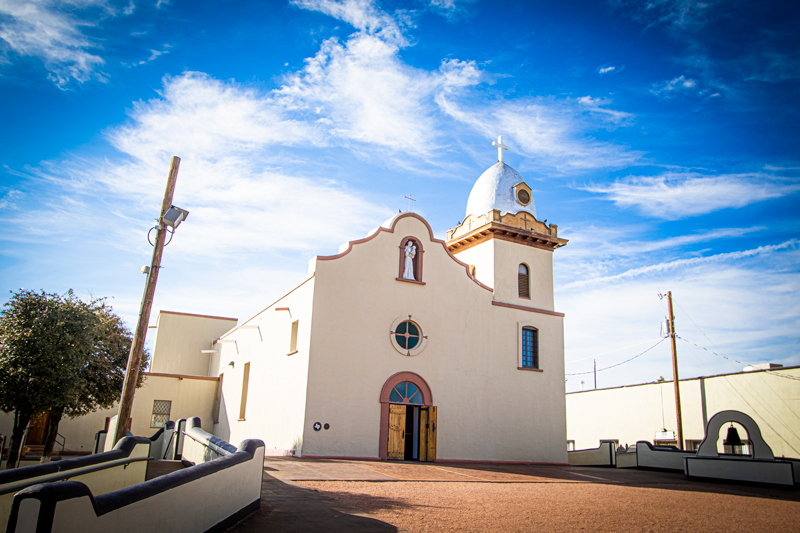 An earlier mission had been established in the region, in what is now central Juárez. By 1659 Fray García had established a Mission to the Piro Indians who had moved into the Pass. This Mission, Nuestra Señora de Guadalupe, is today the side chapel to the cathedral church in la Ciudad Juárez, Chih., Mexico.

The current site of Ysleta mission was first used as a refugee camp in 1675 for Pueblo Indians who were escaping Apache raiders.
Then, six years later, the people fleeing Pope’s revolt in New Mexico arrived at the present site on the Camino Real and “below” the Paso del Norte by October 9, 1680. On October 12, 1680, midway between the Spanish settlement of Santísimo Sacramento (Ysleta Mission) and the Indian settlement of San Antonio.

The original mission church at Ysleta del Sur is believed to have been built of mud chinked logs and willow reeds. Tigua labor built a permanent mission from adobe by 1682. Bishop Salpointe, of Tucson, dedicated the building on October 19, 1682, two days prior to dedicating the mission of La Purísima in nearby Socorro, Texas.

In 1991 Bishop Peña of El Paso transferred the responsibility of Ysleta Mission to our Province of Our Lady of Consolation friars who continue to staff the parish.

The Tigua people still identify with the Mission and observe several ritual days with dancing, drumming and chanting. The principle of those days is the Feast of St. Anthony of Padua, June 13th.