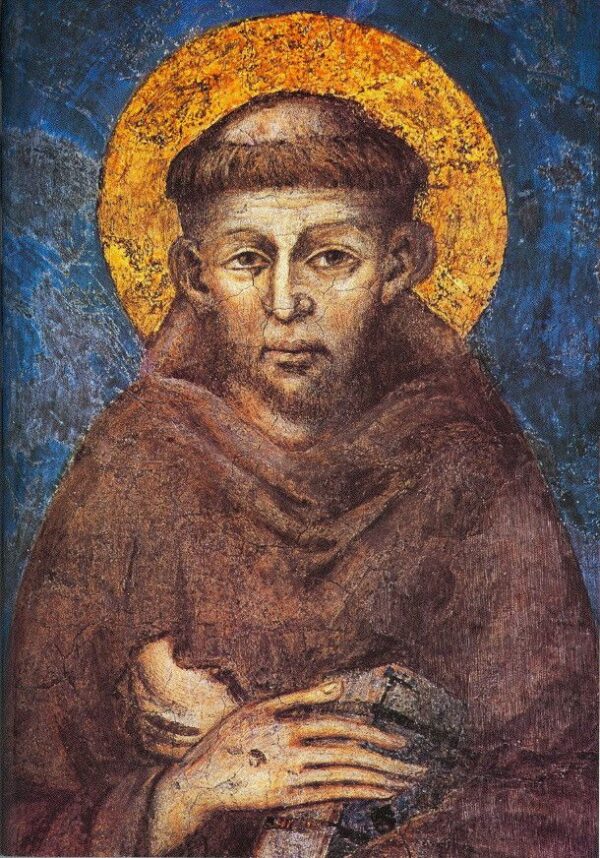 In everything we do we strive to follow the way of St. Francis and those first men who followed him as “little brothers.” We look to him and the first Franciscans, we see a man who took literally the words of Jesus in the Gospels, and those who were trying to follow him as best as they could.

But as important as following the Rule of St. Francis, trying to live simply, and serving others in our lives, there is much more to Conventual Franciscan spirituality.

A good Friar is someone who is in love with life and with every person God brings into his life. Because he is poor and keeps nothing to himself, he is able to share everything around him with those he meets. He shares his talents and training, obviously. But also everything else that God gives him, he tries to give away.

If you’ve spent much time with us, you know that when we get together there we usually have a lot of laughter, a lot of fun, and almost always something good to eat.

And we take joy in knowing that those first Franciscans, and the thousands who have followed them, were just like us, with strengths and weaknesses, good qualities and bad. We always have the faith and hope that if we follow the example of love given by the “little poor man of Assisi,” Christ will continue to draw us closer to Himself. We invite you to learn more about St. Francis and his life below:

Born circa 1181, in Assisi, duchy of Spoleto, Italy, Saint Francis of Assisi, though revered today, began his life as a confirmed sinner. His father was a wealthy cloth merchant who owned farmland around Assisi, and his mother was a beautiful Frenchwoman. Francis was not in want during his youth; he was spoiled, indulging himself with fine food, wine, and wild celebrations. By age 14, he had left school and become known as a rebellious teenager who frequently drank, partied and broke the city curfew. He was also known for his charm and vanity.

In these privileged surroundings, Francis of Assisi learned the skills of archery, wrestling and horsemanship. He was expected to follow his father into the family textile business but was bored by the prospect of life in the cloth trade. Instead of planning a future as a merchant, he began daydreaming of a future as a knight; knights were Medieval action heroes, and if Francis had any ambition, it was to be a war hero like them. It wouldn’t be long before the opportunity for warfare beckoned. In 1202 war broke between Assisi and Perugia, and Francis eagerly took his place with the cavalry. Little did he know at the time, his experience with war would change him forever.

Francis and the men of Assisi came under heavy attack, and in the face of superior numbers, they took flight. The whole battlefield was soon covered with the bodies of butchered, mutilated men, screaming in agony. Most of the surviving Assisi troops were immediately put to death.Unskilled and with no combat experience, Francis was quickly captured by enemy soldiers. Dressed like an aristocrat and wearing expensive new armor, he was considered worthy of a decent ransom, and the soldiers decided to spare his life. He and the other wealthy troops were taken as prisoners, led off to a dank underground cell. Francis would spend nearly a year in such miserable conditions — awaiting his father’s payment — during which time he may well have contracted a serious disease. Also during this time, he would later report, he began to receive visions from God.

After a year of negotiations, Francis’ ransom was accepted, and he was released from prison in 1203. When he came back to Assisi, however, Francis was a very different man. Upon his return, he was dangerously sick in both mind and body — a battle-fatigued casualty of war.

One day, as legend has it while riding on a horse in the local countryside, Francis encountered a leper. Prior to the war, Francis would have run from the leper, but on this occasion, his behavior was very different. Viewing the leper as a symbol of moral conscience — or as Jesus incognito, according to some religious scholars — he embraced and kissed him, later describing the experience as a feeling of sweetness in his mouth. After this incident, Francis felt indescribable freedom. His earlier lifestyle had lost all of its appeals.

Subsequently, Francis, now in his early 20s, began turning his focus toward God. Instead of working, he spent an ever-increasing amount of time at a remote mountain hideaway as well as in old, quiet churches around Assisi, praying, looking for answers, and helping nurse lepers. During this time, while praying before an old Byzantine crucifix at the church of San Damiano, Francis reportedly heard the voice of Christ, who told him to rebuild the Christian Church and to live a life of extreme poverty. Francis obeyed and devoted himself to Christianity. He began preaching around Assisi and was soon joined by 12 loyal followers.

Some regarded Francis as a madman or a fool, but others viewed him as one of the greatest examples of how to live the Christian ideal since Jesus Christ himself. Whether he was really touched by God, or simply a man misinterpreting hallucinations brought on by mental illness and/or poor health, Francis of Assisi quickly became well-known throughout the Christian world.

After his epiphany at the church of San Damiano, Francis experienced another defining moment in his life. In order to raise money to rebuild the Christian church, he sold a bolt of cloth from his father’s shop, along with his horse. His father became furious upon learning of his son’s actions and subsequently dragged Francis before the local bishop. The bishop told Francis to return his father’s money, to which his reaction was extraordinary: He stripped off his clothes, and along with them, returned the money back to his father, declaring that God was now the only father he recognized. This event is credited as Francis’ final conversion, and there is no indication that Francis and his father ever spoke again thereafter.

The bishop gave Francis a rough tunic, and dressed in these new humble clothes, Francis left Assisi. Unluckily for him, the first people he met on the road were a group of dangerous thieves, who beat him badly. Despite his wounds, Francis was elated. From now on, he would live according to the Gospel.

Francis’ embrace of Christ-like poverty was a radical notion at the time. The Christian church was tremendously rich, much like the people heading it, which concerned Francis and many others, who felt that the long-held apostolic ideals had eroded. Francis set out on a mission to restore Jesus Christ’s own, original values to the now-decadent church. With his incredible charisma, he drew thousands of followers to him. They listened to Francis’ sermons and joined in his way of life; his followers became known as Franciscan friars 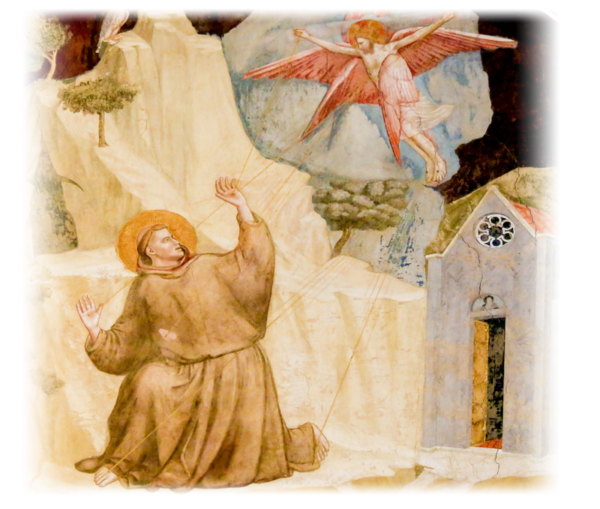 Continuously pushing himself in the quest for spiritual perfection, Francis was soon preaching in up to five villages per day, teaching a new kind of emotional and personal Christian religion that everyday people could understand. He even went so far as to preach to animals, which garnered criticism from some and earned him the nickname “God’s fool.” But Francis’ message was spread far and wide, and thousands of people were captivated by what they heard.

In 1224 Francis reportedly received a vision that left him with the stigmata of Christ — marks resembling the wounds Jesus Christ suffered when he was crucified, through his hands and the gaping lance wound in his side. This made Francis the first person to receive the holy wounds of the stigmata. They would remain visible for the rest of his life. Because of his earlier work treating lepers, some believe that the wounds were actually symptoms of leprosy.

As Francis approached his death, many predicted that he was a saint in the making. When his health began to decline more rapidly, Francis went home. Knights were sent from Assisi to guard him and to make sure that no one from neighboring towns would carry him off (the body of a saint was viewed, at the time, as an extremely valuable relic that would bring, among many things, glory to the town where it rested).

Francis of Assisi died on October 3, 1226, at the age of 44, in Assisi, Italy. Today, Francis has a lasting resonance with millions of followers across the globe. He was canonized as a saint just two years after his death, on July 16, 1228, by his former protector, Pope Gregory IX. Today, Saint Francis of Assisi is the patron saint for ecologists — a title honoring his boundless love for animals and nature. In 2013, Cardinal Jorge Mario Bergoglio chose to honor Saint Francis by taking his name, becoming Pope Francis. 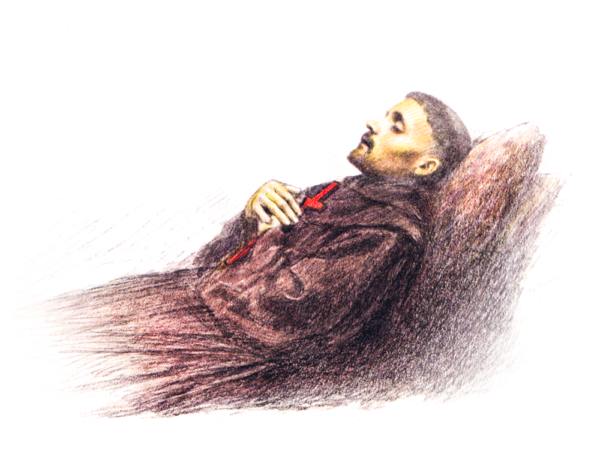 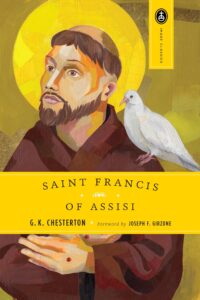 By universal acclaim, this biography by G. K. Chesterton is considered the best appreciation of Francis’s life–the one that gets to the heart of the matter. 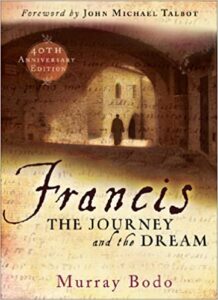 Francis –  The Journey and the Dream
By Murray Bodo, OFM

“Francis: The Journey and the Dream depicted a Francis who ‘sang’ to me. I felt that I had found a teacher to lead me home. I had no idea where this was going to lead, but I was ready to follow.”—John Michael Talbot 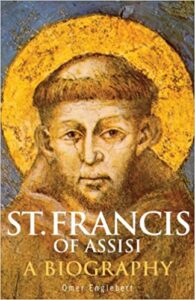 St. Francis of Assisi: A Biography
By Omer Engelbert

This classic work puts the him in the context of his historical setting and his spiritual influences. Inspired by a deep and simple love, Francis abandoned his fortune and chose to live simply. His love for Jesus Christ, his love for animals, and his love for nature continue to inspire many to this day.

Eager to Love: The Alternative Way of St. Francis
By Richard Rohr. OFM

Franciscan Father Richard Rohr helps us look beyond the birdbath image of the saint to remind us of the long tradition founded on Francis’ revolutionary, radical, and life-changing embrace of the teachings of Jesus.