St. Francis of Assisi, with his first companions, presented themselves to Pope Innocent III in 1209, seeking oral approval of their evangelical form of life. As a result of this permission, which permitted the penitents of Assisi to also preach penance, the Fraternity saw itself notably expand to become a religion of the Friars Minor of which St. Francis speaks in the final part of the Rule. Shortly after, following the Lateran Council IV, November 29, 1223, Pope Honorius III approved the definitive Rule, which is now followed.

In 1274, at the death of the Minister General, St. Bonaventure, the Order grew ever more divided between the approach of the “Friars of the Community”, also called “Conventuals”, who had been given permission to have their communities in the cities in order to preach the Gospel and be of service to the poor, and that of the “Zealots” or “Spirituals”, at first, and later as “Observants” who professed ideals of absolute poverty and stressed the eremitical and ascetical dimensions of Franciscanism.
At the beginning of the XVI century, Pope Leo X, seeing the impossibility of the Observants and the Conventuals living under the same Rule and government, brought together all of the reformed groups under the Rule of the Friars Minor of the Regular Observance, with the Bull, Ita Vos of May 29, 1517: the others being brought together to form the Order of the Friars Minor Conventual, under the guidance of a Minister General. The separation of the two groups was also confirmed by Pope Leo XIII, who, with the Bull Felicitate Quadam of October 4, 1897, reorganized the Franciscan Orders into four Orders, each with its own Minister General: the Order of Friars Minor; the Order of Friars Minor Conventual; the Order of Friars Minor Capuchins; and the Third Order Regular. 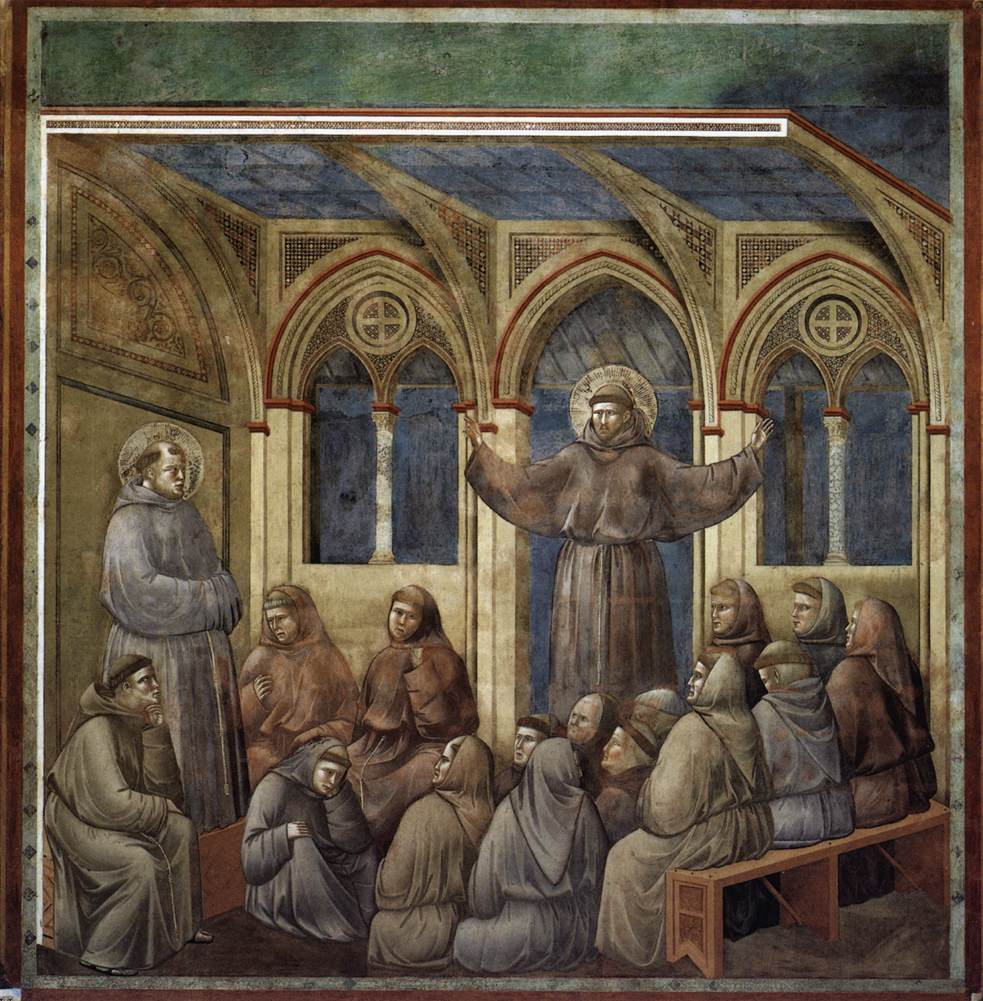 Legend of St Francis: 18. Apparition at Arles
1297-1300 Upper Church, San Francesco, Assisi This is the eighteenth of the twenty-eight scenes (twenty-five of which were painted by Giotto) of the Legend of Saint Francis.

Today the Friars Minor Conventual wear a black habit, in those countries which had undergone a suppression, while, in the mission lands, and beyond, they have begun to return to the original color of the Franciscan habit: ashen grey. They continue to care for, among other things, the Basilica of St. Francis and the Sacred Convent of Assisi, and their principal center of study is the Theological Faculty of St. Bonaventure in Rome. Among the centers of formation and culture, one also finds the Theological Institute of St. Anthony the Doctor, in Padua.

The General Curia of the Order is centered in Rome at the Friary of the Twelve Holy Apostles.
As of December 31, 2015, the Order had 4,225 religious (of whom 21 are bishops, 2,907 are priests and 12 are permanent deacons). It had 631 friaries located in 33 Provinces and 20 Custodies. The Order was present in 67 countries (7 countries in Africa, 18 in North, Central and South America, 10 in Asia and 31 in Europe and Australia).

We, Conventual Friars, continue to live in “conventos” or friaries, as they have been more commonly known in the United States. Our community of more than 4000 Friars covers the world, divided into Provinces such as ours – The Province of Our Lady of Consolation.

And although our Minister General resides at our headquarters in Rome, called the Santi Apostoli, the Basilica of St. Francis in Assisi remains the spiritual center of our Order. An endless line of pilgrims continues to visit the little town, as they have since the time of Francis himself, seeking a deeper connection with the Poverello (little poor man) and his total abandonment to God’s Providence and Will.

We Conventual Friars also serve as confessors at St. Peter’s Basilica in the Vatican, and have responsibility for the Basilica of St. Anthony in Padua, located in northern Italy near Venice.

In all of our ministries, wherever we are found, we follow those first “little brothers,” continuing in Christ’s name His work of healing, teaching, and spreading the Good News of God’s eternal and overwhelming love.

Our Franciscan Habit and Cord

We wear a black or gray habit, as distinct from the brown one typically worn by other Franciscan communities, with a simple cord tied into three knots, representing our Vows of Poverty, Chastity, and Obedience.

Our vow of poverty calls us to focus on the needs of others, especially the poor, rather than materialistic items. The vow of poverty impacts not only those material things we may use in our lives but also any attachment that might result from such use, all for the sake of the kingdom.

All baptized are called to the virtue of chastity, that is, an appropriate expression of our gift of sexuality per our state in life: whether married, single, or religious life and Holy Orders. Our vow of consecrated chastity as Franciscan Friars directs our energy and focus on the Lord and the people of God we are called to serve. Rather than forming exclusive relationships in our consecrated life we open ourselves to be instruments of God’s love to all.

Our vow of obedience is rooted in our desire and call to God’s will. In living out our vow of obedience, we humbly assent to the fact that no one person has all the answers, and we listen to the collective wisdom of others and our conscience, during our vocation.