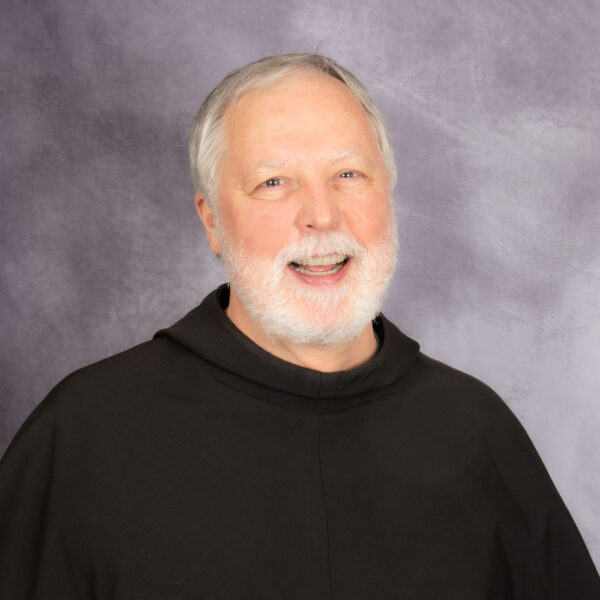 Friar Martin Day, OFM Conv. celebrates his 40th year in a Franciscan habit this summer.  He was invested as a novice in 1982 at the then-novitiate in Mishawaka, Indiana.  Martin grew up as the 5th of the nine children of Murl and Henrietta Day, and still enjoys the blessings of coming from a large family.  Martin’s first inkling of a call to priesthood came in early grade school.  His first response, however, was to say “No way!”  He was put off by the fact that his parish priest lived alone.  His awareness of his calling went dormant until college, where Martin pursued a degree in Business Administration at Indiana University.

Coming to the conclusion that he was destined for something other than a career in banking or finance, Martin opened himself up to the will of God with help from a spiritual director and a charismatic prayer group that met at his college parish.  One afternoon, leaving to walk to school he was haunted by the sense that he was forgetting something and went back into the house to see what it might be.  There he received the unmistakable message “Martin, I want you for the priesthood.”  Despite the clarity of the experience Martin was still reluctant.  All he could come up with this time was, “Well, maybe.”

Visits with the community of friars in St. Louis followed and upon graduation Martin joined the friars as a postulant in the formation house in Washington, DC where he attended Catholic University. Upon completion of a Master’s degree in Religion and Religious Education, Martine was invited by his community to study theology at the University of Fribourg, Switzerland. After 5 years of study there Martin returned to his province as a licensed theologian.  A brief, catastrophic experience teaching 9th grade religion was followed by a year’s worth of Clinical Pastoral Education, a great supplement to the academic theology he had learned at the university.

Martin spent a subsequent ten years in parish ministry before being assigned to the formation team in Washington, DC and elected as well to serve as the treasurer of the province.  After three terms (13 years) in both positions Martin asked to return to parish ministry and has spent the past 8 years serving as pastor of St. Benedict Parish in Terre Haute, Indiana.  During his time in Terre Haute Martin also served for five years as dean of the Terre Haute deanery.

Martin’s sense of vocation has been strengthened by the yeses he has said to God’s call and the unexpected blessings that have come from doing so.  The way forward has rarely been straight but God in his goodness always seems to find a way.  Pondering that mystery has led to a deep sense of amazement at what God can do if we give God a chance.