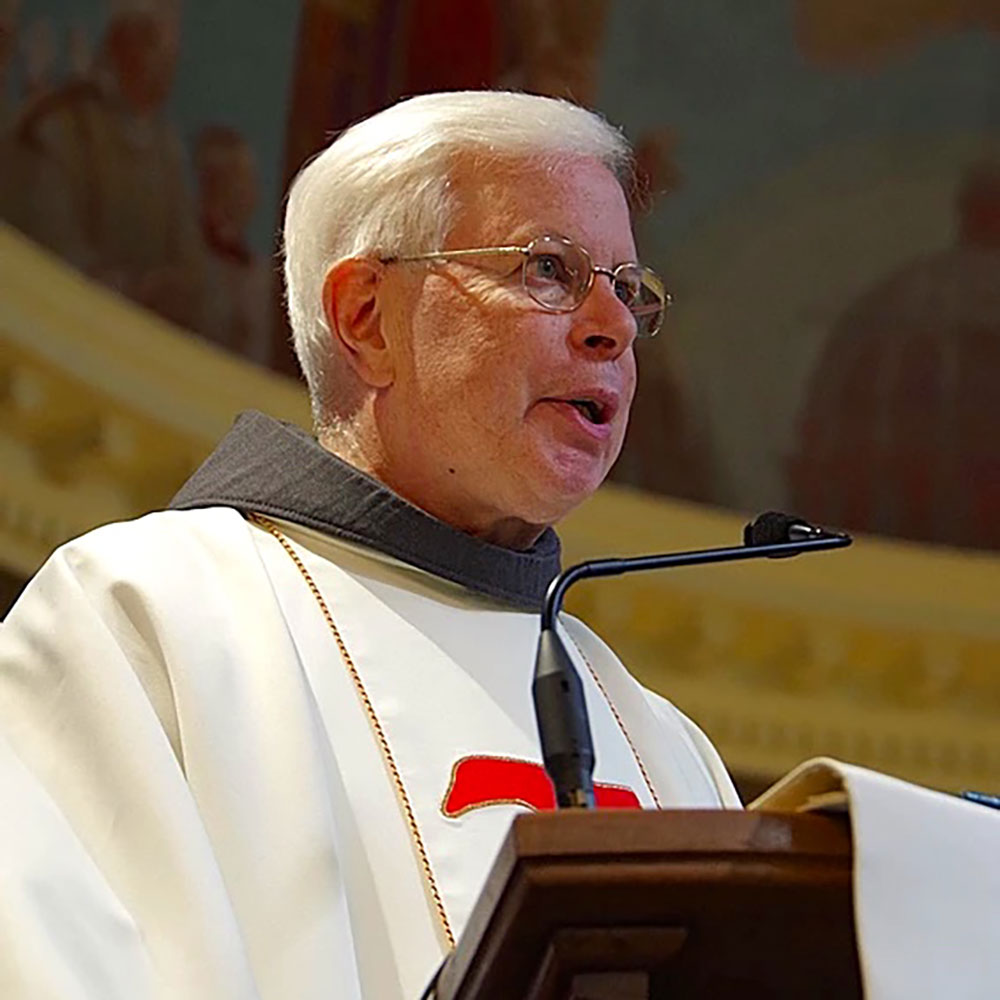 Friar Peter Damian Massengill, OFM Conv. was born on November 18, 1948 in Louisville, Kentucky. After his first year at then Bellarmine College in Louisville, now Bellarmine University, he entered the Conventual Franciscan Order and completed his undergraduate studies in sociology and psychology at St. Louis University in Missouri. He professed Solemn Vows on September 9, 1972.

He continued at St. Louis University School of Divinity for his graduate theology, where he served as President of the Student Council during his final year of studies. Following his Deaconate, he went to Washington, D.C. where he worked at the Liturgical Conference and then as Assistant Director for the Center of Pastoral Liturgy at Catholic University of America. It was at this time that he also assisted in the development of the National Association of Pastoral Musicians.

Following Ordination to the Priesthood on May 8, 1976, assignments found him as Pastoral Associate at St. Anthony Parish in Grand Rapids, Michigan, where he was also elected to the priest senate for that Diocese. From there he went to Prior Lake, Minnesota where he was the Director and Guardian of the Franciscan Retreat Center for eight years. He was named Pastor and Guardian of St. Paul Parish in Louisville, Kentucky, and then Sts. Peter and Paul Church in Gilbert, Iowa.

As a “second hat” Peter Damian served as the Justice and Peace Coordinator for the Conventual Franciscans in North America for nine years. During the General Chapter of 1989, the Minister General appointed him the first General Delegate for the International Commission for Justice, Peace, and the Safeguarding of Creation. He established the Order’s central office of the Commission in Assisi, Italy on January 1, 1990.

Besides coordinating the work of the 72 Conventual Franciscan jurisdictions located in 55 different countries, at the time, he worked with other parts of the Franciscan Family numbering almost 1,120,000 members, by animating such efforts as the Franciscan Non-governmental Organization at the United Nations. Along with the activity within the Franciscan Order, he has worked closely with Governments and International Organizations in developing initiatives for peace and reconciliation. These efforts took the form of courses, lectures, dialogues, workshops and retreats.

In September of 1997, Peter Damian was named Rector and Pastor of the Basilica and National Shrine or Our Lady of Consolation in Carey, Ohio. On June 27, 2001, he was elected Minister Provincial of the Province of Our Lady of Consolation, covering the Midwest and Southwest United States. He held this position until November of 2007 when he was elected Guardian of the Friary of the Twelve Holy Apostles, the General Headquarters of the Order in Rome. On September 7, 2013, he was elected as the Major Superior of the Conventual Franciscan Custody of Great Britain and Ireland. At the end of his first term in this position, in September, 2017, having been diagnosed with Parkinson’s, he was assigned to Holy Cross Friary in Mesilla Park, New Mexico.