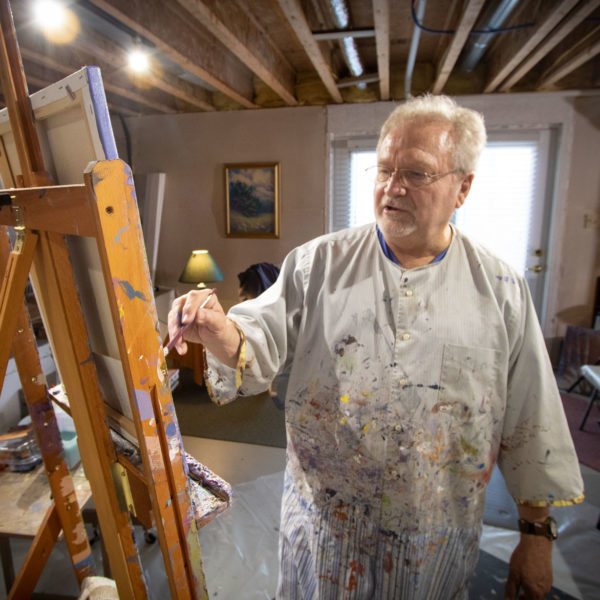 Vincent is a Catholic priest and a Conventual Franciscan friar of the Province of Our Lady of Consolation.  Much of his energy and inspiration for ministry derives from what the Earth has to say.  St. Bonaventure wrote, that “The first book of revelation is creation itself”.

Friar Vincent’s work has been greatly influenced by the landscapes of the Southwest where he was involved in ministry from 1997 to 2015.  During a 2006 exhibition benefiting a local effort to preserve open spaces and vulnerable habitat in the area, his artistry was first noticed.  Soon after, he held his first one-artist show at the Hal Marcus Gallery in El Paso, Texas.  Many of his works continue to be displayed at the gallery as well as featured on the website (www.halmarcus.com).  Vincent is now in ministry at Mount St. Francis in Southern Indiana where he is engaged in retreat ministry and art classes.  He continues to maintain a rigorous studio schedule.

In his Earthscapes, Friar Vincent tries to capture the beauty of both the wild and the remote as well as the near and the subtle.  One of his creations – an annual calendar – is designed to capture viewers’ attention to the Earth and to embrace the spirit of Pope Francis’ Encyclical Letter on the environment: Laudato Si – On Care for Our Common Home.  Like the Holy Father, Vincent wants to help the public awaken to the Earth’s profound beauty before it is lost due to greed, consumption and disregard for the poor.  Vincent sights ancient Biblical wisdom and the warning of Jesus who said that if we go after and consume the whole world we would be in jeopardy of losing our own souls.  Or as another has stated: “If we seek heaven … the earth will be saved, but if we seek ONLY the earth …we will loose all”

Friar Vincent holds a Bachelor’s degree in Studio Arts from St. Louis University and a Master of Divinity from the Washington Theological Union.  His activism has been extensive, including opposition to war and militarism, defense of the unborn, consistent pro-life advocacy, Christian Peacemaker Teams, Pax Christi, racial justice and protection of the environment.